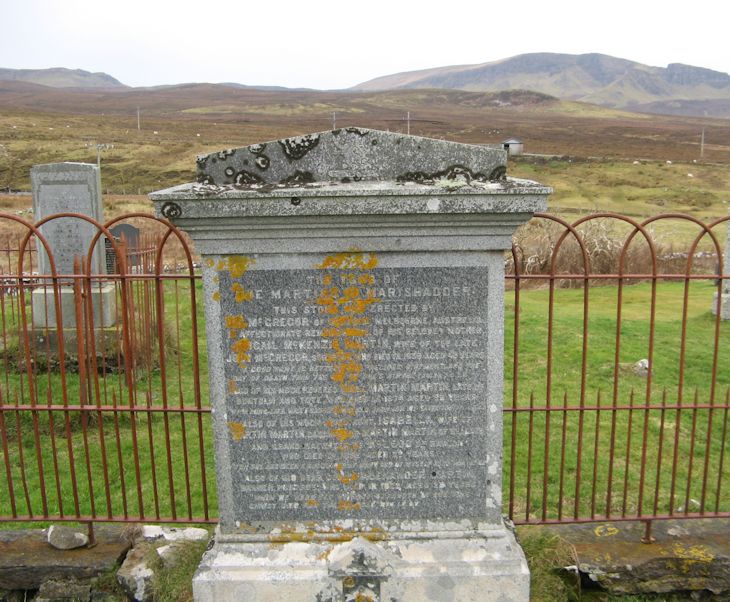 "A good name is better than precious ointment and the/day of death than the day of one's birth." Eccles. 7C. 1V.

also of his much revered uncle MARTIN MARTIN late of/Duntulm and Tote who died 1874 aged 92 years.

also of his dear godson ALEXANDER MARTIN/banker, Portree, who died in 1872 aged 29 years.

"When ye were yet without strength in due time/Christ died for the ungodly".  Rom. 15C. 6V.

Beautiful.
Added by Michael Martin on 12 February 2016.
"Dr. McGregor" should read D. R. MCGregor (ie.:Donald Robert McGregor), a son of Abigail Martin (Vic BDM # 1480/1912).
Added by Stephen John Martin on 02 September 2017.
For the records Martin Martin had at least 2 children who are named in his Will. He did not die childless as several sources suggest. The 2 daughters are: Isabella by Margaret MacPhee and Jessy by Janet MacPhie.
Added by Stephen Martin on 06 March 2018.
There were a number of Martin Martins born in Skye. I read the will of Martin Martin who wrote the Description of the Western Isles and I am not aware there was any mention of children in the Will stored in the National Libraries of Scotland. I know I am descended from one of the Martin Martin who would have lived in the 1700s.
Added by Marion Ross on 19 March 2018.
I'm sorry it is not the Martin Martin of Tote I was referring to but Martin Martin who wrote the book. On my mother's side there are five different branches of Martins from the Trotternish area in our family tree.
Added by Marion Ross on 20 March 2018.
I have just come back from the Isle of Skye and visited Martin Martin Tote house. Visited the archives at Armadale and Portree. Which all neglect Martin's 2 daughters Janet (my 2x great grandmother) who married Donald Cameron from Kylerhea.
and Isabella. I do have a print out of his having a previous spouse Janet Macphee. There just isn't any other info I can find. Visited the grave and left a small bouquet.
Added by Sandi Havler on 24 September 2018.
Isabella Martin died unmarried in Kew Victoria on 1 January 1903. I have her death certificate. She had lived in Victoria for 16 years before her death. Her father is named as Martin Martin, tacksman. Her mother's name is spelt Margaret Martin formerly McPhee. She was supposedly 83. The informant was the undertaker.
Added by Steve Martin on 26 September 2018.
Isabella and Janet were about a year apart in age. Martin Martin mentions both in his will in 1784 and that Margaret MacPhie who he gives a bequest to is alive living at Tote too. So there has been an error made on Janet's death certificate. Martin Martin mentions that Margaret [who died unmarried] had a granddaughter named Jessie. Janet Martin had a daughter named Jessie [Cameron]. Having children by 2 different MacPhies doesn't seem likely.
Added by on 03 January 2021.
Hi - I am a descendant of Martin Martin, just no sure which one. I believe he was married three times!! to the surnames, MacLeod, MacMillan and MacDonald. One of his daughters had a son called Archibald Sinclair in 1841 Portree. I cannot find anything about Archibalds father. If anyone knows anything please get in contact.
Added by Stephanie Milligan on 09 March 2021.